A common, but not often discussed winter weather problem for homeowners is ice damming.  When the temperatures drop, ice dams can form on the roof of a home.  Prevention is the best medicine for ice dams, so knowing what they are and how they form is invaluable for avoiding water damage to your home. 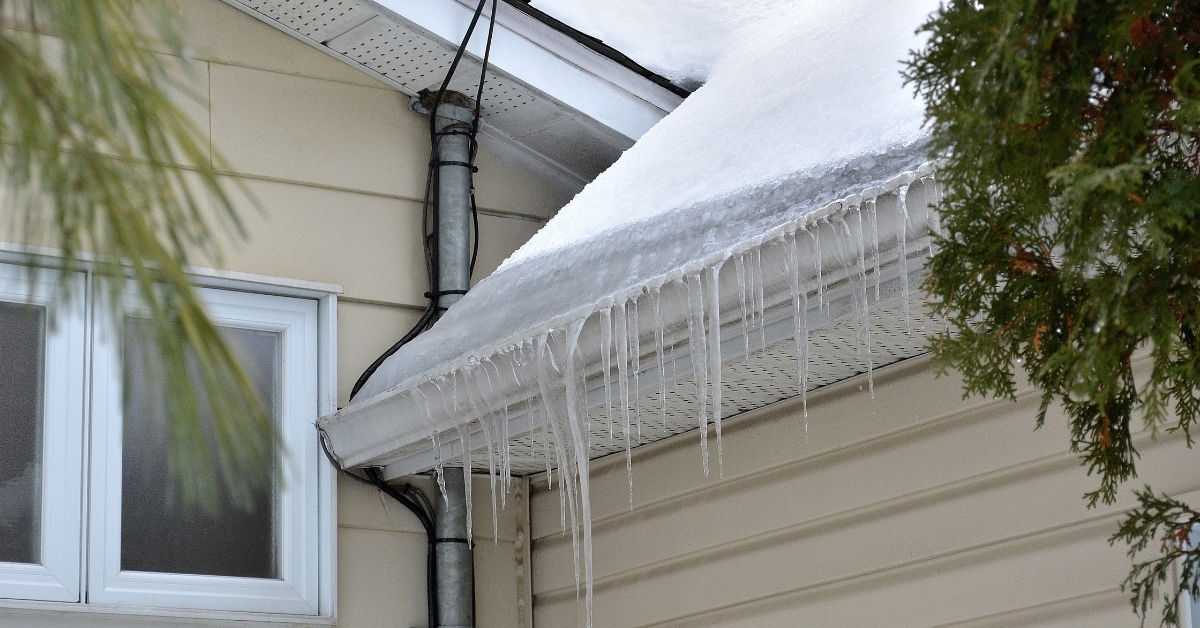 What is an Ice Dam?

An ice dam is exactly what its name suggests: a ridge of ice at the edge of the roof that prevents the runoff of melted snow creating a backup of water behind it.  There are variety of factors that lead to the formation of ice dams including external air temperatures, snow covering the roof, and heat loss from inside the home.  Ultimately, ice dams form due to varied surface temperatures across the span of a roof.  The upper portion of the roof must remain above 32 degrees while the lower portion and the outside air temperature must be below 32 degrees.  This combination of temperatures will cause snow from the upper portion of the roof to melt, trickle down the roof, and freeze.  The freezing water will slowly build into the ice dam, eventually preventing water from leaving the roof.

Ice dams are relatively easy to prevent if you’re aware of the risk factors for their formation.  An ice dam can’t form without melting snow, so the first and most effective way to prevent ice damming is to remove snow accumulation from the roof.  There are also steps that can be taken for long-term prevention so you don’t have to risk getting on the roof to remove snow every winter.  First, make sure the ceilings in your home are airtight.  If warm air leaks into your attic space it will heat the upper portions of your roof causing accumulated snow to melt.  For this same reason, increasing the insulation in the ceiling or roof is a helpful change to your home.  Certain other home features such as skylights, heating ducts through the attic, and recessed lights also allow for warm, moist air to accumulate near the roof increasing the risk of ice dam formation.

If an ice dam is identified in time, it’s possible to remove it before it causes damage to the home.  There are several ways an ice dam can be removed.  If you want to tackle it by yourself, calcium chloride filled socks laid vertically across the dam will gradually melt the channels into it allowing the water behind to flow off the roof.  Two less do-it-yourself friendly methods of removal are removing it by force, usually with a mallet, and steaming channels into the dam then chipping away the remainder of the ice.

Unfortunately, dams often go unnoticed until damage inside the home is identified.  Ice dams can cause damage to both the interior and exterior of the home.  The presence of the ice itself will damage siding, gutters, and roofing.  Water intrusion from the buildup of water behind the dam can cause extensive interior water damage.  As the water builds up on the roof with nowhere to go, it will eventually leak into the home damaging any materials it contacts.  The damage is often gradual, meaning the water intrusion can go undetected for a long time.  Undetected water in the home will eventually lead to mold growth in addition to the water damage itself.  Anytime you notice damage from an ice dam, it’s important to seek professional mitigation for the restoration of your property.